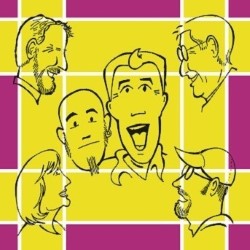 Come with us on a journey through the ups, downs and sideways of life. The hilarious Grace and Favour cast bring you a show that has laughs at every turn, from nappies to incontinence pants and all life in-between. Featuring babies, kid's TV presenters, an air guitar salesman, the world's most annoying concierge, a forgetful doctor, a lounge singer and an invasion of pirates all joined together by the philosophical musings of the comedy writer, Rob Grace. It's life Jim but not as we know it.

Hailing from the beautiful Cotswolds the Grace and Favour team bring you their unique take on life, from nappies to incontinence pants and all life in between.

With live sketches featuring babies, Children's TV presenters, an air guitar salesman, the world's most annoying concierge, a forgetful doctor, a lounge singer and an invasion of pirates, all joined together by the philosophical musings of the comedy writer, Rob Grace.

By the end of the show you'll be fluent in Gummidge, Welsh and Yorkshire, you'll have the phone number for the best ambulance chasers in town and, if you want to reverse the aging process, 'Soreal' have just the product for you.

Babies Jack and Harry invite you to join them at a party with drinks, girls and a dose of the pox. Then take a trip to the doctor with the Children's TV presenters where Billy is after a cure for his rictus, Penelope needs to treat her 'women's problems' and Geoff wants rid of his Pneumonoultramicroscopicsilicovolcanoconiosis.

If you want more than just a laugh, Grace and Favour is generously giving away free air instruments for each performance, so you can join in the fun as we visit an air guitar shop. You will, however, need to ensure you have your Fringe accommodation arranged, as our Hotel will offer very little respite.

Don't forget to visit our doctor, even though he'll probably forget you've got an appointment with him, then sit back, imagine you're tucking into your scampi in a basket and enjoy the dulcet tones of our lounge singer Ralph, as he brings you the finest finale song of this millennium.

A multimedia show, bringing together live and pre-filmed sketches, Life Jim (But not as we know it) is the brainchild of Rob Grace and is performed by him and a talented cast who can promise you 50 minutes of laughter.

Grace and Favour Productions are planning new shows for 2016 following their success over the last two years.