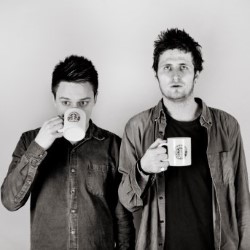 Joe Barnes and Henry Perryment will lead the audience though an array of different characters in a sketch show which contemplates the big issues: life, death, our very existence.

Goodbear has been selected to perform as part of the prestigious Invisible Dot's New Wave. The show is accompanied by an original score by Max Perryment 'superbly atmospheric' (Lise Smith) and directed by George Chilcott 'ingenious direction' (The Sunday Times)

Joe Barnes is a member of critically acclaimed sketch group Minor Delays - part of the Invisible Dot's prestigious New Wave and named by the British Comedy Guide as one of the best reviewed shows of the Edinburgh Festival Fringe 2014. He is a former President of the Leeds Tealights and a member of DugOut Theatre. He will be appearing later this year in Channel 4's End the Awkward campaign made in affiliation with the charity SCOPE. He is represented by PBJ Management.

Henry Perryment is a member of the critically acclaimed DugOut Theatre and has been performing and devising with the company since 2011. He co-devised and performed in Inheritance Blues, winners of the NSDF Festgoers' Choice Award, Best Devised Show and the Cameron Mackintosh Commendation for Musical Theatre. He is a former Leeds Tealights member and also performs as a stand-up comedian across the London comedy circuit. He is represented by PBJ Management.