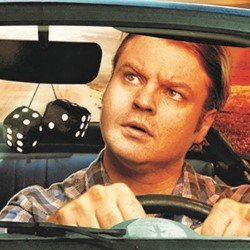 Is Glenn alone in his escapades around the world or is there an unseen companion travelling with him during these adventures? Is it an inner monologue or a heckling demigod? 'Wool's new show is a masterpiece of comedy, which has the audience helpless with laughter. I genuinely think this is one of the best hours of comedy I have ever seen' ***** (Kate Copstick, Scotsman).

Canadian favourite Glenn Wool is back at the Fringe with a brand new hour - Creator, I Am But A Pawn. Last year Glenn received brilliant reviews across the board for his show, Wool's Gold, a collection of his impeccable back-catalogue of comic tales over the past 20 years. This critical acclaim is sure to continue this year in his August run at Assembly George Square.

Is Glenn alone in his escapades around the world or is there an unseen companion travelling with him during these adventures? Is it an inner monologue or a heckling demigod? Is he the author or the passenger of a cosmic joke? All things considered in this triumphant return with Creator I Am But A Pawn.

Glenn currently co-hosts the Free-styling podcast alongside Frankie Boyle. He has also appeared on many US podcasts including a hat trick on Marc Maron's WTF. He will be appearing on the new series The John Bishop Show on BBC 1 that transmits on 5th July.

His comedy career began in his hometown of Vancouver in 1995, and three years later Glenn moved to London. Glenn quickly became one of the rising stars of the UK scene and in recent years has hit the international circuit in a huge way; performing to colossal crowds in Singapore, Holland, Dubai, New York and L.A. Glenn's style means he's loved by audiences of the great summer music festivals in the UK, including Reading and Leeds, Latitude, Bestival, Download and, of course, Glastonbury. This year he has already performed at SXSW festival alongside Bill Burr.