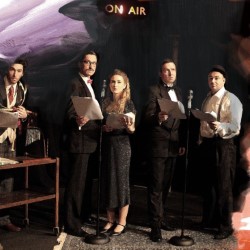 Step into a 1940s radio studio as Interrupt the Routine unleash their vintage, radio-style comedy The Misfits of London: The Gin Chronicles. Amateur detectives John Jobling and his housemaid Doris Golightly are on the hunt for a missing London Gin magnate, Cornelius Jupiter, attempting to uncover what's going on behind the goings-on. Will their encounters with a raft of colourful and intriguing characters be just the tonic to help them solve the gin mystery, or will the situation turn rummy?! Four actors and a Foley artist present a rollercoaster comedy in this verbal and visual treat.