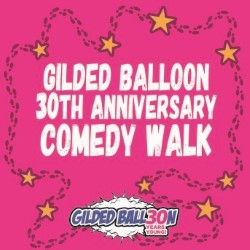 Gilded Balloon veterans Arthur Smith and Steve Frost take you on a tour of their old haunts (or what is left of them). Walk through the Cowgate and hear tales of madcap antics, hilarious comedy escapades and who did what, where... and with whom! Your ticket also gives entry into the Gilded Balloon's flagship comedy show Late'n'Live! 'Arthur's tours inject a unique wild and hilarious excitement into the streets of Edinburgh' (Readers Digest). 'Stephen Frost, if he stood still long enough, they'd build a pub around him' (Boothby Graffoe).