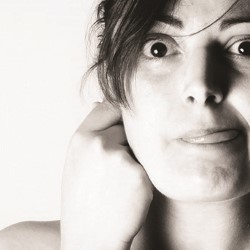 Giada comes back to Edinburgh with a brand new hour of fun, dark material, from sex to fairy tales. 'Warm, funny, confident and out there' (Kate Copstick).

NOT suitable for families.

Giada was born in Italy but lives in London. She's been performing comedy for the last 7 years. In London she co-runs an experimental bilingual Italian/English comedy night (Il Puma Londinese/The London Puma) which plays at the Fringe Festival this year on 13th and 20th of August at 10pm, as part of Heroes @ The Hive.

Giada works as a freelance political and business researcher. She specialised in Security Studies, with a focus on terrorism. Previously she has worked as freelance academic researcher, writing extensively on the European Enlargement Process, Human Rights in Turkey and Freedom and Security in relation to theories of the State.

Basically, she's never managed to hold down a 'proper' job for longer than 13 months!