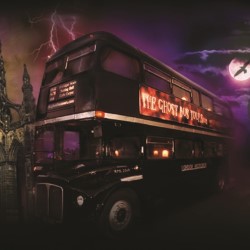 A theatrical sightseeing tour aboard a classic 1960s Routemaster bus, taking you on a journey around the darker side of Europe's most haunted city. Join your creepy conductor and a peculiar psychic investigator on a hilarious trip around the ancient city's sites of murder, torture, execution and paranormal activity. From the makers of the Edinburgh Ghost Bus Tours comes this comedy horror show you'll never forget as you travel around the city and discover its dark and unusual secrets. 'Far better than much of the Fringe' (Edinburgh-Reviews.co.uk).