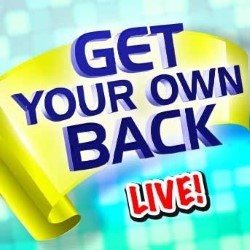 Dave Benson Phillips hosts this live version of the fast paced, slapstick game show where contestants compete in a series of fun games and challenges for the chance to gunge their opponents. Get Your Own Back: Live! is a gunge tank game show based on the long running classic children's TV series.