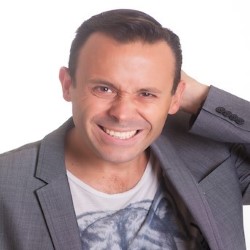 Previously nominated at Dave's Comedy Festival, Geoff takes on the vast ranks of modern morons. From lazy lefties and dogmatic atheists to those mums who annex coffee shops. However, Geoff is also becoming more stupider. He recently watched something on Channel 5. 'Genuine iconoclast' (Chortle.co.uk). 'Master of anecdotal storytelling' **** (EdFestMag.com). 'Fearless, very funny' **** (BroadwayBaby.com). 'Comedian with a big future' **** (Mirror). Geoff recently featured in Comedy Central at the Comedy Store, and has written for shows including: Live at the Apollo, The Now Show, Sarah Millican Television Programme and British Comedy Awards.

Geoff Norcott is selfish, incapable of compassion and buys the Daily Mail. Well, he voted Conservative so that must be true...right?

Previously nominated for 'Best New Show' at Dave's Leicester Comedy Festival, Geoff takes on the vast ranks of modern morons: from lazy lefties and dogmatic atheists, to those mums who annex coffee shops.

However, Geoff is also becoming more stupider; he recently watched something on Channel 5. So, before he plunges down the IQ rankings, Geoff wants to offer some unique perspectives.

For example, corporatism - he's for it. The only reason corporations got so big in the first place was because people kept buying what they were selling. It's the epitome of democracy. NHS privatization? He's for that too. Why should people be able to drink a litre of vodka a day for decades then go running to the state when their kidneys hurt?

Geoff's not preaching to the choir - he's actively looking to pick fights with it.

Geoff Norcott is fast becoming one of the most sought after comics on the circuit, with an impressive list of TV writing credits and a sitcom pilot commission for BBC Radio 4. In addition to the shows above, Geoff has written for: Stand up for the Week (Channel 4), A League of their Own (SKY1), Funny old Week (ITV1), Play to the Whistle (ITV1), Live at the Apollo (BBC1) & The Now Show (Radio 4).

Last year Geoff appeared on Comedy Central's Comedy Store and in 2015 he's back on the same show - as well as supporting both Sarah Millican and Kevin Bridges on tour.