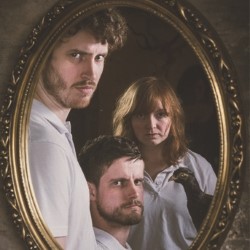 Foster's Edinburgh Comedy Award Best Newcomer nominees and Chortle Award winners Gein's Family Giftshop bring their second show to the Fringe. Ed, Kath, Jim and the one you never see are darker, faster and funnier than ever before, and they have an hour of brand new sketches that aren't for everyone but might just be for you. Winners: Best New Sketch Act and Audience Choice Award, London Sketchfest 2014. 'Would unsettle even the darker League of Gentlemen fan.' ***** (Sunday Times). 'Theirs is a dark and sinister comic world' (Guardian).

Following the critically acclaimed success of their debut show in 2014, Geins Family Giftshop return to the Edinburgh Festival Fringe this year with their second brand new show - the aptly titled Volume 2.

Ed, Kath, Jim and Kiri (the one you never see) are faster, funnier and more unpredictably peculiar than ever before, and they have an hour of brand new sketches that aren't for everyone but might just be for you.

The group is made up of Kath Hughes, Edward Easton, James Meehan and Kiri Pritchard-Mclean (the silent member in name only) and has been gigging for just over three years. They met whilst studying at The University of Salford, quickly bonding over a shared love of black comedies, serial killers and Walton Ford.

They appeared in the second series of Inside no. 9 after Reece Shearsmith and Steve Pemberton came to see last year's show in Edinburgh. They have also been commissioned to write three one off shows by BBC Radio Wales and will be performing on Radio 4's Sketchorama, during this year's Fringe (all of which are due to be transmitted in August).