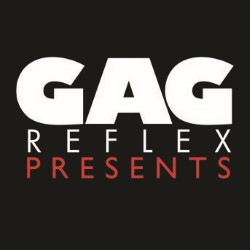 Gag Reflex presents Tom Lucy, Sean Nolan, Chris Washington and Benji Waterstones, hosted by Freddy Quinne and Kate McCabe. The best new comedians working today, handpicked for one hell of a show. You lucky thing. See tomorrow's household names today. From the producers that brought you The Boy With Tape on his Face and Gein's Family Giftshop.

At 18 years-old, Tom Lucy is one of the youngest comedians working professionally on the UK circuit. He performs regularly for The Comedy Store, Up The Creek and The Glee Club. In the last six months, he has supported Jack Whitehall and Harry Hill on tour.

"Outstanding young comic and one to watch. Tom is headed for great things!" - Harry Hill

Sean Nolan has been performing stand up for over three years and in that time has quickly become one of the most original and sought after acts on the Irish comedy circuit, performing at the Vodafone Comedy Carnival, Sky Cat Laughs and the Galway Arts Festival, as well as being a regular at top clubs. In 2013 he won the national televised competition The RTÉ Two New Comedy Awards, a nationwide search over a 6-part series to find the best new Irish comedy talent.

Chris Washington began performing stand-up comedy in July 2012. He regularly performs all over the UK and is fast becoming one of the most sought after new acts on the circuit. With bags of Northern charm and hilarious tales it's clear to see why Chris is flying up the comedy ladder.

A trainee psychiatrist struggling to adjust to life in London, Benji Waterstones took to the stage to work through his various woes. In two short years he's reached the final in various new act competitions and is the current reigning champion of the Beat the Frog World Series.

"One of my favourites" - Steve Bennett, Chortle

Beginning her stand-up career in NYC, Kate McCabe now gigs primarily in the UK. As an improviser, she works with Murder Inc. and ComedySportz.

MC of the prestigious Big Value Late Show in 2014 and the AAA Early Show in 2015, Freddy Quinne is rapidly emerging as one of the best new comperes on the circuit following being named Hilarity Bites New Act of the Year in 2013.

"Uncompromising... a natural comic with near perfect timing" - Manchester Wire