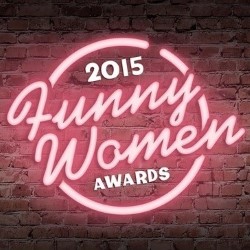 Stand-up show / variety performed on the following days in August 2015...

The Funny Women Awards have been promoting female comic talent for over a decade, and witnessed some fantastic acts who are now major names on the comedy circuit. Join us for a stellar line-up of up-and-coming comic performers, all vying for a place in the Funny Women Awards Final, and a chance to spot the next big thing! All proceeds from the Awards go to domestic violence charity, Refuge.