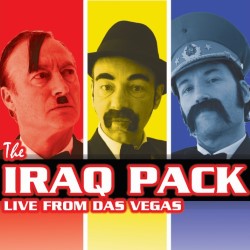 Back from their unsuccessful world tour, the singing dictators of dark cabaret have come to Edinburgh. The comedy war machine that is Frank Sanazi, Dean Stalin, Saddami Davis Jnr and Osama Bin Crosby, or the Four Crooners of the Apocalypse, as they are known, will unleash such extreme renditions as Strangers on My Flight, Arranged Marriage, Ain't That a Shot in the Head, and Mein Way on an unsuspecting public. This show is not for the faint-hearted. 'Brilliantly stupid, fantastically wrong and ridiculously funny' (Scotsman).