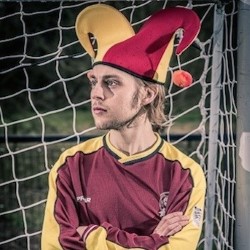 There may be no I in team, but this absurd romp through the history of an imagined football club is performed by one man. Renowned improv-comedy maverick Tom Skelton brings to life the founding heroes, foreign stars and billionaire owners who populate the glittering history of the greatest club that never existed. A story of strange and silly, funny and unforgettable characters linked by Red Star Belgravia. You don't have to like football to love Foolball: it's the beautiful game as you've never seen it before. 'Makes the audience break down with laughter using just his facial expressions' (EdFringeReview.com).