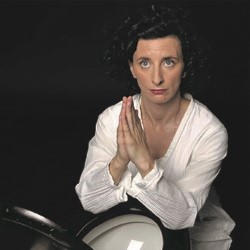 In 2012 Felicity Ward's deeply personal show The Hedgehog Dilemma established her as one of Edinburgh Fringe's fastest-growing favourites, turning her neuroses into an hour of laugh out loud storytelling. It went on to be nominated for or win Best Comedy at every Australian festival it toured to. Over the next two years she spent it earning a reputation as one of the top observational comics around. In 2015 she returns to the festival with a brand new hour of her multi-award winning, highly acclaimed stand-up, for the premiere of her darkest, funniest show yet.

After presenting last year's highly successful Australian documentary Felicity's Mental Mission (ABC1/ABC2) about mental illness and irritable bowel syndrome, Felicity realised how much more material was ready for the taking to be explored and lampooned in her own psyche and bowel. In What If There Is No Toilet?, she delves deep and funny into her depression, anxiety, a lame attempt at self-harm, and her longest running relationship: with the toilet.

In her short time living in the UK Felicity has exploded onto the scene, appearing on Russell Howard's Good News (BBC3), Alan Davies' As Yet Untitled, BBC3's Red Button Comedy, with even more exciting upcoming appearances in Josh Widdicombe's hotly anticipated BBC3 sitcom Josh, Channel 4's Digital Hijack and John Bishop's new BBC1 variety show. And if that's not enough, the big screen beckons too! To add to her cinema credits of co-starring in Working Dog Productions' (The Castle/The Dish) Australian comedy feature film Any Questions For Ben? she appeared in last summer's box office smash-hit The Inbetweeners Movie 2.

Felicity spent half of last year performing around the world. After debuting her show The Iceberg at her home country's festivals to critical acclaim, she spent a week at the prestigious Gotham Comedy Club in New York, gigged all over LA, and appeared at the invite-only Montreal Just For Laughs and South Africa's month long curated festival Cape Town Jive Funny Festival, alongside The Daily Show's Trevor Noah.