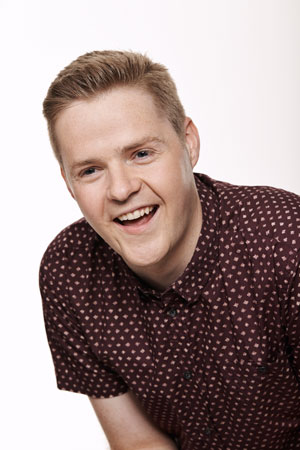 Find out all about Tom Ballard - your new favourite chubby, non-driving gay Australian.

As a comedian, I am never allowed to ever be fully happy with my career, body or number of Twitter followers. Generally, though, I just feel pretty lucky to be here.

I originally wanted to be an actor, then had a crack at a stand-up comedy competition for high school students in 2004 because it seemed like another chance for me to get some of that attention that I so desperately craved. I fell in love with the craft and the fact that when I was onstage EVERYONE HAD TO LOOK AT ME AND ONLY ME. I kept at it and in 2006 I was a national finalist in RAW Comedy (the Australian version of So You Think You're Funny). My first solo show won the Best Newcomer Award at the Melbourne Comedy Festival, I did four years of national breakfast radio show and a bunch of TV hosting and 7 hour long shows and then I wrote this and now I'm tired.

Taxis (I don't own a car), Rainbows (I'm a gay) and Hatred (sometimes the taxi drivers don't like me because I'm a gay).

I'm doing it because it really is seen as the Mecca of comedy. I feel like I'm ready to take on the challenge. I'm so glad I've waited a while before I made it over so that I can figure out who I am as a comic (for now) and to have a bit of cash under my belt so I won't have to become a sex slave in order to pay off the debt I'll chalk up. I've heard enough horror stories/warnings/glowing endorsements to feel appropriately prepared and excited.

I'm hardcore Facebooking every single person I know who might be in the general vicinity of the UK in August. What's that? You're living in the Ukraine? I don't care, BOOK A FLIGHT.

At one point I went over my budget with a producer and I think we worked out that even if I sell 90% of all my tickets, I'll still be down around £1,000. LOLOLOLOLOLOLOL!

Honestly, any time I get a decent laugh from a crowd who has no idea who the hell I am is a real buzz. I'm sure that throughout the Fringe I'll kill sometimes and bomb some others, because that's comedy. But the satisfaction of having a great gig in a city on the other side of the planet is pretty addictive.

I've already booked tickets! What a comedy-loving loser! I'm very excited to see Stewart Lee, Alun Cochrane, Lost Voice Guy: I'm Only In It For The Parking, Tiffany Stevenson, Bridget Christie, Paul Sinha (I saw him in 2009 and he blew my mind), Mark Watson, David O'Doherty, Daniel Sloss and probably 80 others.

Bill Cosby. You know why.

By all rights they probably shouldn't, but I'd bloody love it if they did. If you really want to embrace the spirit of the Fringe and take a punt on a nice, chubby, pale Australian who's been doing this for a long time and who will shake your hand as you walk into the room and make you laugh, then I'm the one for you.