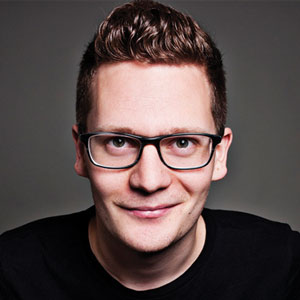 It's Robin Morgan's first full Fringe this year: his free show is just half an hour long, but you'll get to find out why he wouldn't like to meet the Eggheads stars.

Despite starting in late 2010, this is embarrassingly my first full Fringe. I'm very excited about it. I've been doing bigger club gigs and a few festivals over the last couple of years, and since I moved to London last year it's progressed quicker than I'd hoped for, so yeah, pretty happy! I'm a one-step-at-a-time kind of person.

It's about trying to grow up and make smart, adult decisions - despite having a childish sense of humour and being an idiot.

It's my first full run, so I haven't experienced the stress first-hand yet. But asking me the question is now making me worry, so thanks for that.

I'm going to do this thing called 'flyering', which I think is quite groundbreaking, and should provide me with that extra few punters. I hope no-one else has thought of it.

Doing a Free show, I hope I'll break even, or at least not lose a huge amount. It's my birthday on the 19th, so if anyone wants to put some coins in an envelope, that'd be super.

I'm looking forward to doing the show every day. I'm sure I won't be saying that at the end, and sick of the sound of my own voice, but at the moment I'm excited. And to see a huge amount of different acts while I'm up there. And I've never had alcohol poisoning before, so that'll be fun.

Any of the 'Eggheads' who are on the show Eggheads. Come and see my show and you'll find out why.

Because it's my first festival, and they should all be really kind and make me feel welcome. Plus, it's only half an hour. And it's free. And it's funny.