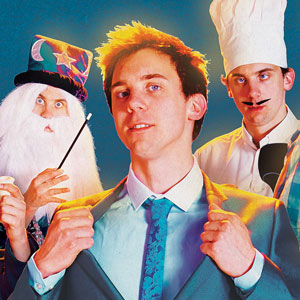 I've been doing stand-up comedy since late 2003, in that time I've performed from everywhere from comedy clubs to sheds to theatres (both stage and operating). I've performed at school discos; in a Challenger 2 tank; in six separate stables and I had my biggest gig last year where I performed in a rocket to scientists who were aiming to sling shot around the sun, go back in time, and prevent the assassination of Franz Ferdinand. Sadly the mission failed, but fuck me what a gig.

I've always enjoyed being up at the Fringe and I've never found it to be stressful, and I put this down to three simple rules: 1) Don't pay attention to reviews, yours or anyone else's. 2) Don't feel like your career isn't progressing, everyone moves at their own pace. 3) MDMA.

I am planning to take away three chairs out of the venue every performance so that by the end of the run I am able to sell out the show without anyone buying a ticket.

In 2006 during my Edinburgh Fringe debut for the first twenty nine performances of the run everything I said to the audience sounded really quiet and far away and everything they said was incredibly loud. It took me and the venue staff a long time to fix the problem but it turned out we had the microphone cables the wrong way round.

I don't think any show has the same level of dangerous stunts as my show. This year the climax of my show involves me cutting an arm off each night, early bookings are recommended.