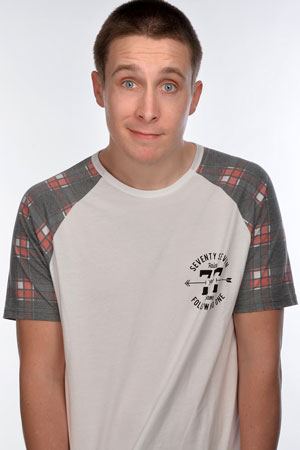 I started doing stand-up in 2010, went full time in 2013. Since then I have supported Eddie Izzard in front of over 2,000 people, won 'Scottish Comedian Of The Year', and appeared on the BBC's Best Of Edinburgh online show. To be honest though, I'm never really happy where I am at, I'm constantly wanting to do more and get better, last year I did approximately 140 gigs during the Fringe, including 9 gigs in one day, I think if I do any more than that this year I might die.

An hour of jokes and self deprecating stories about being a Scottish, Catholic, Bender who lived in England during the referendum. 23, Done.

I really enjoy it, since I travel a lot for gigs most of the year it's the only time I get to stay in the same place for a month. It's also a rare month where loads of my friends are in the same city, so I get to catch up with people I haven't seen in a while.

Doing British Comedy Guide interviews obviously. Apart from that, advertising on Grindr is always good at getting people in who want to stare at a 25 year old for an hour!

I think I will lose about £7,000. I will likely have a profile on justgiving.com in September.

Most of the Fringes I've done before are like a blur. I've seen an act get a countdown before getting booed; the audience went "5,4,3,2,1.....BOOO". I once had to postpone my show by 5 minutes so that the other act who was on could kill a moth that was hanging around the stage. I was more scared of the moth than the drunk Edinburgh midnight audience.

I can't remember show titles well, but these acts are all at the Fringe this year and are all on my 'to see' list: Matt Price, Martha McBrier, Jenny Collier, Sofie Hagen, Angela Barnes, Dane Baptiste, Ray Bradshaw, Mark Nelson, Diane Spencer, Jack Campbell, Bobby Mair, Foil, Arms & Hog...that is just some of my list as well.

Richard Pryor & Billy Connolly with me doing an open spot in the middle, that way I could watch my two favourite acts and put it on my CV that I supported them on tour and people would be more likely to come to my show.

My Family, I'm terrified that they will one day come to my gig.

Because I supported Richard Pryor and Billy Connolly on tour...remember?