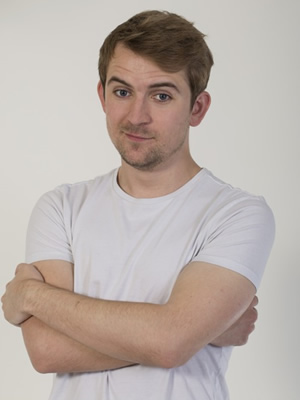 After a number of years performing at the festival, Jack Campbell is ready to debut his first solo hour of comedy.

I performed at my first gig in 2010 whilst apart of a comedy society at University but it wasn't until I graduated in 2012 that I started gigging much more regularly. In 2012 I was voted Best Newcomer at that year's Nottingham Comedy Festival, and continued to develop my style.

In 2014 I reached the final of three competitions and even won English Comedian of the Year, which meant I got to go to the Adelaide Fringe Festival 2015 and perform an hour long solo show. As well as this, I have done gigs in Estonia, Latvia and Finland. 2015 marks my fifth year performing at the Edinburgh Festival, and also the year I perform my debut hour-long solo show Is This the Best of Jack Campbell?.

Overall I am happy with where I am going, sometimes it's hard and scary to think about, but I keep on working hard and meeting new people and the gigs get steadily better both in terms of reputation and the slot I am given. I've already got the next few years roughly planned out, which helps a lot.

A show using material I have developed over a few years, highlighting the struggles and views of a 24 year-old from Cambridgeshire.

It's my fifth year going up to Edinburgh for the festival so I'm now used to it, like a pilgrimage. For some reason, I don't find it massively stressful, a little frustrating at times, but it's mainly because it's such an amazing place to develop your skills, then get noticed and generally build up a following. As stressful as it can be, what you get out of it is so worth it.

I'm thinking about hiring flyerers this year, but nothing majorly cunning. I hate flyering myself, but my usual method is handing out flyers after other gigs I do around the city. Luckily my show is at a decent time in that I'm not competing with any big draws, and it's too early for anyone to be absolutely battered. I'm just going to try and generally put on a great show and hope word of mouth helps it along.

I'm aiming to actually make a little bit of money via donations, and be a little more careful with spending than I have been in previous years. Even if I manage to come back with about £100 that I have put away each day I'll be happy. But I do plan on eating the occasional Haggis Pizza, going to the zoo, having a few beers, so we will see. This is my first year doing a free show on my own, which is daunting, but I do get to keep all the donations for myself. 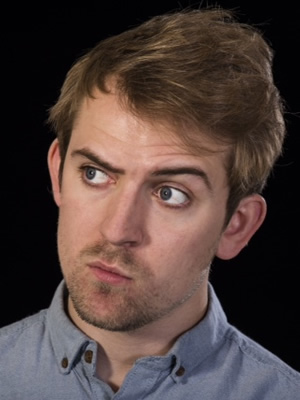 Performing at the RBS headquarters for a charity gig was bizarre, or when I stayed out in Costorphine and kept finding the animal print underwear. Good old AirBnB. So much oddness happens up there and it's great.

Mainly other comics who I have met and enjoyed. I'll fire off the names of the top of my head, sorry If I miss anyone! Daniel Nicholas, Jenny Collier, Larry Dean: Fudnut, Ray Bradshaw: Deaf Comedy Fam Tour, Tom Toal, Brennan Reece: Evermore, Jessica Fostekew: Silence Of The Nans, Freddie Farrell. I never really watch much stuff up there, because if I have any spare time, I use it eating or sleeping, but am making an effort to go see more this year.

I'm a big fan of American stand-ups, and at the moment, Paul F. Tompkins would be my big draw, along with Hannibal Burress, Maria Bamford, John Mulaney, Nate Bargatze and of course Bill Burr and Louis CK. I would love to get Conan O'Brian involved in some way! Oh and Mark Thomas from Picnicface! As for the British folks, I'm a big fan of Alan Davies, Sean Lock and Bill Bailey. Maybe get them to redo some stuff from the 90s just to see how weird it be now.

I have no idea, maybe a future version of myself who has been trapped in the city for 30 years, hasn't made it anywhere with comedy and keeps giving me a vague warning. That or anyone wearing a shirt with a naked lady on it and tribal tattoos, because of the year we are in.

Because I'm English Comedian of the Year 2014 and it's my debut! But it's on the whole run of the festival, so I'm sure you'll have time either way.

'Is This the Best of Jack Campbell?' is at 2pm at The Banshee Labyrinth on 7-31 August. Listing