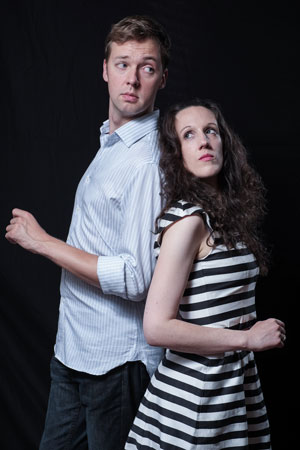 Folie à Deux had its first Fringe outing at the Pleasance last year, but we've been performing together for years in Austentatious and various other incarnations. Andrew works at QI and co-hosts No Such Thing As A Fish; Charlotte is one of the doyennes of London's improv scene, specialising in Punning and Hilarious Tension. And we are absolutely delighted with where we're at, which is, for the purposes of this Fringe, a shipping container.

Charlotte and Andrew make up ridiculous scenes, lunatic characters and hilarious monologues based on a single word before your astonished eyes. You'll laugh.

For the glory, the lucrative Hollywood optioning rights, and, crucially, the larks.

Charlotte will be building an enormous wicker man out of flyers; Andrew will be painting Arthur's Seat with a mural of our faces.

Oh, stacks. It'll be like Walter White's house at our flat.

Seeing a man in a top hat and tails cycling a piano along outside the Gilded Balloon. He'd rigged it up so that when he pedalled it moved along sideways. It was wonderful.

The delightful sketch stylings of In Cahoots, the insane energy of Aunty Donna, and Bruce, by a fantastic theatre company from down under.

Rik Mayall on lead vocals. Tommy Cooper on xylophone. Animal from The Muppets on drums. David Mitchell on spoken-word solo. The entire cast of Green Wing (backing choir). And Buster Keaton on triangle.

What a question! You'd have to have an ego the size of a planet to insist you were more worth seeing than EVERY other comedy show at the Fringe. Fortunately, we do, and we are, quite simply, better.