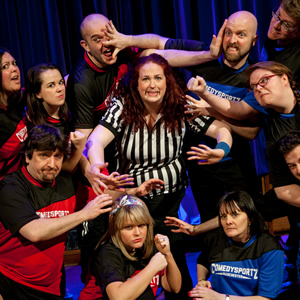 ComedySportz UK is a show in which two teams battle it out for the biggest laughs as players create quick-witted sketches, scenes and songs from whatever suggestions are thrown at them by the audience. The team behind the show answer our questions here...

ComedySportz Worldwide has been performing all over the world for over 30 years and ComedySportz UK is going into its 14th year. We're going strong in Manchester and delighted to be the representatives of ComedySportz in the world's largest arts festival.

It's an all ages, all improvised competitive comedy show with two teams competing for the audience's laughter and we all wear snazzy shirts.

We ask ourselves that every year. Sean [Sean Mason] says it's the joy of the audiences, getting to play in front of hundreds of new faces from around the world and connect with performers from across the globe. What he really means is it's the best place in the world for deep fried chocolate products and pies.

It's also a bit of time to spend with each other. There are 14 of us going this year, and as there are 25 in our troupe it's hard to find time to have an adventure together.

Yes. But you'll have to come and watch the show to find out what they are.

It's not about the money, we usually break even and that's pretty much all we want. 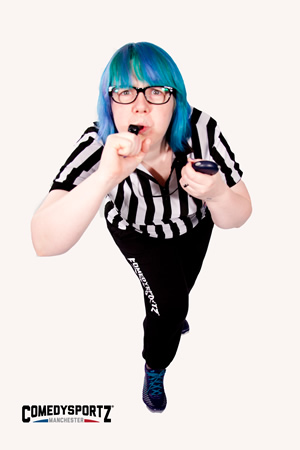 We're a family friendly show so we couldn't possibly tell you the whole story (long story short: kids, don't drink, and make sure you can remember which suitcase is yours).

We're a big cast so we've all had pretty odd experiences; the most unexpected last year was spending the time to talk to a man who was struggling to come to terms with his sexuality and, hopefully, helping him in some small way through a difficult time. He really enjoyed how happy we were on stage and it really cheered him up and actually taking the time to talk to him after really seemed to help him. Actually that one wasn't so much weird as just very emotional. We hope he's in a better place now. Hello if it's you.

Also, being extremely excited when Bob Mortimer walked through the door into our show... to then help him find the room he really wanted to be in... ah well.

We always check out Baby Wants Candy: The Improvised Musical. They're so much fun, totally effortless and a couple of their cast members are from ComedySportz Chicago (and schedules permitting will play with us again this year).

There are loads of great sketch groups at the moment but if you like dark (and we do for such a family friendly crew) check out Gein's Family Gift Shop and Norris and Parker: All Our Friends Are Dead. We were also hoping to catch Massive Dad last year but they very rudely kept selling out.

It's pretty standard Edinburgh luck that half the shows you want to see are on at the same time as the show you're in too, so we'll see.

We're also hoping to find stuff we just didn't expect and have any idea about. The main tenet of Improv is "Yes, And...", to step out into the unknown and enjoy where you end up. It's a good attitude to adopt to the Fringe programme.

8. If you took over programming a venue, what would your perfect line-up of comedians be?

Well, obviously it would have to be an Improv programme. Would love to see all of the ComedySportz teams worldwide. Baby Wants Candy. The Kids In The Hall. The Comedy Store Players. TJ and Dave (look them up, they're awesome) and of course every show we can't see because they're on at the same time as ours.

The Grim Reaper. We've got so much left to give.

We're free. We want to provide something that all ages, kids and adults, can enjoy without breaking the budget so that people can afford to see as many other shows as possible and hopefully come back to see as much as possible too - the joy of improv is every show is different!