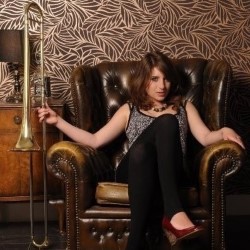 Musical Comedy Awards Best Newcomer, Faye Treacy went to the Brit School of Performing Arts with Adele and Jessie J, and then studied the trombone at The Royal Academy of Music with no one interesting. Faye worries... a lot... about earning enough money to live from telling jokes and playing a dying instrument... relationships (well, one relationship in particular) homelessness, and avoiding it... her uber-dysfunctional family... and how damaging her half-arsed, part-time Nannying is. Join Faye and a very special guest for the afternoon show that really should be on late at night.