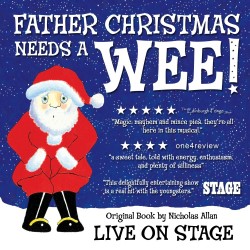 At every house Father Christmas eats and drinks the tasty treats that have been left for him. But when he reaches number 10 he realises that he's forgotten to do something rather important and he really, really, really needs a wee! TaleGate Theatre hit the perfect combination of witty humour, fantastic music and the extra sparkle for which they have become known in this fabulously funny and brilliantly bouncy musical adaptation of Nicholas Allan's much loved book. 'Magic, mayhem and mince pies. They're all here in this musical' ***** (EdinburghFringe.thepodcastcorner.com).