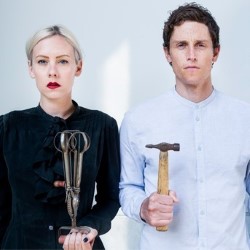 Six months into their relationship, Bryony found out that Tim suffered from severe clinical depression. This was a secret Tim had kept for a very long time. Fake It 'til You Make It is Edinburgh Fringe First winner Bryony Kimmings's new work about clinical depression and men, made in collaboration with her partner Tim, who works in advertising. A wickedly warming, brutally honest and powerfully heartbreaking show about the wonders of the human brain, being in love and what it takes to be a real man. 'Bold, brave and very brilliant' (Independent).

Bryony is an outrageous, hilarious and fearless performance artist from London. Tim is an outrageous, hilarious and fearless account manager from a top advertising agency. Bryony and Tim are a couple. Bryony spends most of her life on tour, trying her best to change the world. Tim spends most of his life at a desk trying his best to sell the world.

Six months into their relationship, Bryony found out that Tim suffered from severe clinical depression which he had kept a secret for a very long time.

A collaboration about clinical depression and men, Fake It 'til You Make It is a warm and brutally honest show about the wonders and pitfalls of the human brain, the taboo of mental illness, being in love and what it takes to be a 'real man'.

After award-winning performances at the Adelaide Festival Fringe and Perth International Arts Festival and a sold out run at London's Southbank Centre, Bryony and Tim will perform Fake It 'til You Make It at the Traverse Theatre, Edinburgh from Thursday 6th - Sunday 30th August as part of the British Council Edinburgh showcase.