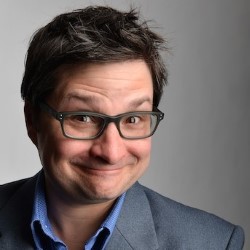 American comic Erich McElroy presents a brand new hour of stand-up. This time Erich explores why no other nation does politics with the same absurdity and insanity as America, and how with the right recipe (a pinch of God, a dash of freedom and a flatbed full of firearms) anyone can be President of the United States. 'A box worth ticking' (Metro). 'Skilled, experienced comedian with an impressive comedy CV' (ThreeWeeks). 'Smart, sharp, endearing comic' (List). 'Well worth it, even if you're not the least bit political' (Edinburgh Evening News).

American-turned-Brit Erich McElroy is coming back to Edinburgh Festival Fringe with his latest hour of comedy - Erich McElroy's Imperfect Guide to Picking the Perfect President.

The race is on to become the next leader of the free world - and Erich's here to explain what it all means.

No other nation does politics with the same absurdity and insanity as America. Becoming President takes just the right mix - a pinch of God, a dash of freedom and a flatbed full of firearms - shake, stir and you've got a new President.

In the show Erich humorously guides the audience through the ridiculous world of US politics. How does America find the leader of the free world? Is it how well a candidate can swallow the biggest corndog in Iowa? A percentage of patriotism based on the number of American flags on their lapel? Or a political advert that shows the best way to execute a bunny rabbit?

Originally from Seattle, Erich has lived in the UK since 2000. And while he left behind baseball and apple pie he never gave up an obsession with American politics. What's funnier really - a by-election in Drip-upon-Boredom or a debate where everyone involved has a gun?

Erich has written for The Herald in Scotland, The Independent, Huffington Post and even Saga. He can be heard each week as co-host of SomeNews Live on Fubar Radio.

This show is Erich's third solo-show at the Fringe, last year he was one of the few to take on the Scottish Referendum and as a result appeared on BBC News, STV and Newsnight. He has previously appeared on BBC Breakfast discussing how he managed to pass the British citizenship test.