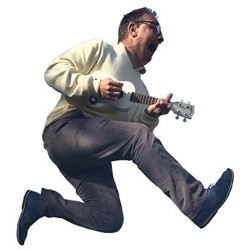 The shows at theSpace Jury's Inn are an hour long.

Midlothian's very own musician, poet and comedian Eric Davidson returns for his seventh consecutive year at the Fringe with It's a Wrong Way to Ukulele. His sell out performances have had audiences literally laughing in the aisles with his dead pan Scottish humour. It is only fair then that in It's a Wrong Way to Ukulele, his topical poetry, parody and wordplay will take aim at modern life along with a host of celebrities and of course, Scotland.

Eric says "I am thoroughly looking forward to this year's show. My material is quirky, funny and at times, thought provoking. There are interesting new works with a couple of old favourites thrown in."

Eric, brought up in the former mining village of Newtongrange and now living in Pathhead, enjoys success on the comedy and corporate circuit throughout Scotland and the UK.

He grew up in a house where, he said, "...laughter filled the air. Growing up, I was nourished on Laurel & Hardy, The Marx Brothers, Inspector Clouseau, Eric Morcambe, Tommy Cooper and the magnificent Spike Milligan. I love The Beatles and when the New Wave movement came along I was fascinated with the writing of Mark E Smith and John Cooper Clarke. Edinburgh in August is special and I am always proud to be involved."

Eric is looking forward to a more intimate space this year in two wonderful venues.