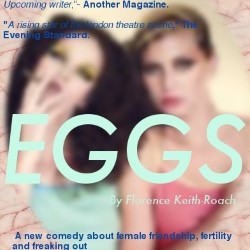 'Rising star of London theatre' (Evening Standard), actor and writer Florence Keith-Roach (ITV2's Cockroaches) debuts this brand new comedy about female friendship, fertility and freaking out. A candid two-hander, Eggs tracks the friendship between two women in their late 20s as they cope with the loss of a friend, face the burden of their own fertility and deal with the ever present sexual obstacles that life indignantly thrusts upon them. Eggs is a play that champions women, their flaws, their dreams, their strength. Funny and very, very rude. 'One to watch' (Litro Mag).

The play is about female friendship, fertility and the feelings of alienation and destruction that this life-giving phenomenon can often evoke in women. We follow two friends, named just GIRL 1 and GIRL 2, as they sporadically meet up over the course of a year. Friends from university, the recent death of their friend, Rose, prolongs an attachment between these two very different women that may otherwise have no longer have existed. The tension of this realisation - mounting with each scene - begins to dominate their meetings.

Florence Keith-Roach has written this bitingly funny new two hander, which tracks the friendship between two women in their late 20's as they cope with the loss of a friend, deal with sexual obstacles and face the burden of their own fertility and the feelings of alienation and destruction that this life-giving phenomenon can often evoke. Both women struggle with the expectations of their office bound, pop-"Beyonce"-feminist, youth obsessed peers. All they want is to go back to their carefree university days, a time of "mephedrone laced lunches" and 90's themed house parties, a time before responsibility, before grief. But, "life is moving on," and one of them wants to move on with it.

Eggs is a play that champions women, their flaws, their dreams, their strength. It is funny, it is candid and it is very, very rude.

Named Media Eye's Top 40 Rising Stars of 2015, Keith-Roach (ITV2's Cockroaches) has been making waves with her acting and writing. Her debut play, Love to Love to Love You, a gender inverted take on the patriarchal 19th century play La Ronde, sold out in both London and Edinburgh, was named Another Magazine's and Le Cool's Top theatre events in London and received 4*s, reviewed as, "thought provoking and entertaining." (The Ed Fest Mag).

Frenching The Bully, a coming of age comedy film, which she co-directed, wrote and acted in with Freddy Syborn (co-writer of Bad Education), has just premiered online and both her and Syborn have been discussing their film on London Live's 6 o'clock news and BBC Radio. She has recently written about her own work and women in the arts for Grazia Arabia, The Observer and Little White Lies.