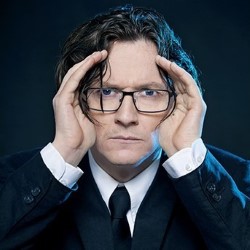 That bloke. You know. The Irish guy. No, not the bald one. The other one. You know him. The one Carol from work really likes. Wait, that might be Jason Byrne. Anyway. Funny chap. Has a new show! 'Comedy's holy grail ... go see!' **** (Sunday Times). 'l assure you Ed Byrne is one comedian you should definitely see' ***** (EdFestMag.com). 'A great comedian making the simple sublime' **** (Edinburgh Evening News). 'It is rare for a comic to merit the word "masterful", in this case it is no overstatement' **** (Scotsman).

One of the UK's leading comedians returns to the Fringe, and to his roots, this summer as he shuns the high-capacity venues and brings his brand new show back to the Gilded Balloon, where it all began for him 20 years ago.

As an observational stand up, Ed Byrne is unrivalled, consistently at the top of his game and producing time and time again fabulously funny and critically acclaimed shows.

Ed's television credits are far reaching notable appearances include Mock The Week, Have I Got News For You, The Graham Norton Show, Live At The Apollo and Comic Relief Bake Off 2015 (all BBC) which saw Ed hosting one of the studio programmes as well as presenting the supporting Appeals VT, filmed in Uganda.

A future combining a TV career and his passion for the outdoors is in his sights as he has now broken into factual presenting. He continues to be a serious outdoors enthusiast and has recently climbed Mt Blanc (Europe's highest mountain) for the second time! The past two years have seen appearances on Dangerous Roads, Volcano Live and he recently co-presented a 3 X 1 hr series, Dara & Ed's Big Adventure, all for BBC Two.

Ed was recently heard as the host of comedy panel show called Britain Vs The Rest Of The World on BBC Radio 4, and he writes a regular column for The Great Outdoor Magazine and will be fitting is as much Munro Bagging as he possibly can on his days off!