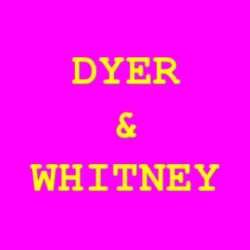 After their successful debut last year, Dyer and Whitney are back with more of their unique, original and hilarious character comedy sketches and songs! This new duo sold out at Leicester Square Theatre 2014.

Following their successful debut last year, Dyer & Whitney return to Edinburgh Fringe with more of their unique and hilarious character comedy sketches and songs. This NEW duo sold out at the Leicester Square Theatre, London in April 2014.

Previous shows have included much loved characters Pam and Sandy sent from the US of A to help 'cure' the gay community turning them straight via the medium of Musical Theatre. Clever and zany sketches and stories featuring a touching relationship with a man's blow up doll along with some quirky songs.

Whitney, (Actress / singer / receptionist) says: "We take the 'sketch' genre to a different place, not just quick fire sketches. We are more involved in the story telling of characters and scenarios, allowing the audience to get to know characters and join in our comedy journey as they come and go throughout the show."

Dyer, (Actor / singer / teaching assistant) says: "With a hint of costume and props the audience have previously been transported from Edinburgh - to Moscow - through therapy - past a talking horse and beyond!"

It was obvious rather quickly that whatever their talents were, they were always being put in the comedic corner. During their time on the singing course both were cast in several comedy roles with very little singing, and although it gave them a slight complex it meant that both their talents were being noted in other areas.

At the end of the course the pair decided to do a mini 'comedy show' which they performed to the whole year and teaching faculty, based on people and events during their time on the course. It was decided by all that not only were they the only two people that could possibly get away with it, but that a new comedy duo was born!

They were most recently chosen to perform solo comedy spots for The Royal Academy of Music's 20th year anniversary concert at The Prince Edward Theatre, giving them both a 3 minute West End debut!

Dyer and Whitney are part of the Free Fringe Festival as they are still poor actors and grateful to be performing!