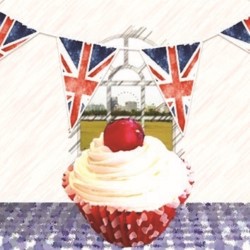 Take seven eager contestants, three feuding judges and one bewildered host, and mix together in a small village. Add the pressure of a baking competition and you've got a recipe for an hilarious musical comedy! The small English village of Bakewell, Derbyshire is holding its annual baking competition and the eclectic group of contestants, including a local postman, a German transsexual and a nun, are each hoping that their baking skills will impress the judges. DULOG return after last year's sell-out show How To Succeed in Business (Without Really Trying).

The small English village of Bakewell, Derbyshire is holding its annual baking competition, under the watchful eye of the head of The Bakewell Baking Committee, Victoria Sponge. The eclectic group of contestants, including a nun, a German transsexual, and the local postman are each hoping that their baking skills will impress the judges. The ensuing combination of hilarious songs, baking disasters and even a little audience participation is guaranteed to put a smile on your face.

The Bakewell Bake Off: A New Musical began as a project written by Masters of Musical Theatre students at the Guildford School of Acting. Cooking up rave reviews, it then went on to a sell-out run at Waterloo East Theatre in London in the summer of 2013, and another successful professional run at the Landor Theatre, London, in the autumn of 2013.

Durham University Light Opera Group returns to the Fringe after previous smash hit sell-outs How To Succeed in Business (Without Really Trying), and The Pirates of Penzance.

Come and join the folk of Bakewell for their annual bake off, where signature cakes combine with song and dance in a fantastic feast of fun!