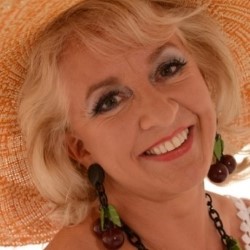 Fascinating Aida's very own Dillie Keane in her first solo show in 557 years. Brand new songs, grand old favourites, gorgeous songs of love and songs of disgraceful filth. Written by Dillie Keane and Adele Anderson. 'Keane, whose piano-playing remains as sprightly and inventive as ever, prompts gales of laughter with merely the raising of a quizzical eyebrow' ***** (Times). 'Her worldview is laconic, her lyrics lacerating, her voice now capable of going deeper than a Chilean miner' **** (Telegraph). 'Exudes faded glamour, a bit like Brighton sea front' ***** (Mail).

After celebrating 30 years of Fascinating Aida in 2013 and completing a nationwide tour of Charm Offensive in Spring 2015, Dillie Keane is taking a break from the trio to bring audiences a brand spanking new show - her first solo show there in 557 years...

Brand new songs, grand old favourites, gorgeous songs of love and hilarious songs of disgraceful filth. Dillie will break your heart, mend it again and have it sent to the cleaners for pressing. And she'll give you her recipe for chutney while she's at it.

Dillie says "Ah, life is strange...and the roller-coaster that is Fascinating Aïda continues to roll and coast. No sooner had we decided we needed a short break after years of solid touring and looking at motorways from our Caravelle, than I decided I'd quite like to do a little solo show at the Pheasantry in the King's Road - something between a retrospective and a heterospective. A look back - and forward - at over thirty years of songwriting.

"And then Adèle Anderson, otherwise known as the Dame on account of her majestic manner, was diagnosed with that ole bugger, the Big C. So our little break will be rather longer than ever intended, and I shall be solo-ing more than I'd ever planned, and keeping the name of Fascinating Aïda alive in my own way.

"So this is by way of a double announcement. Adèle, my old mucker and collaborator of more than three decades, is not well, and I have to sell tickets for a solo show. But she'll be with me on stage spiritually, because she co-wrote almost all of the songs. And Liza Pulman will be with me on stage spiritually, because one of our brand new songs was written specifically for her. And because this incarnation of Fascinating Aïda is VERY strong and we WILL be back."

Having studied music at Trinity College, Dublin and acting at LAMDA, Keane founded Fascinating Aida in 1983, discovering her now long term writing partner Adele Anderson who joined in 1984. With the trio she has enjoyed 30 years of success, playing countless tours around the UK and Ireland, featuring stints in London theatres including the Donmar Warehouse, Theatre Royal, Haymarket, the Apollo and the Garrick. Further afield they have played shows theatres on New Zealand, New York, South Africa as well as one month at the Sydney Opera House.

Away from Fascinating Aida, Keane has presented a number of one woman shows both in the West End and at the Edinburgh Festival as well as developing her acting career in plays such as The Plough and the Stars (West Yorkshire Playhouse); Juno and the Paycock (Leicester Haymarket); Present Laughter (Birmingham Rep) and the Dublin premiere of The Vagina Monologues.