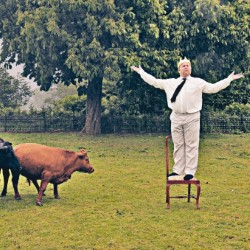 A new adaptation. Poprishchin is a low ranking civil servant for the government, struggling to make his mark on life, but one day he makes an amazing discovery. Could he really be the next King of Spain? Driven insane by government bureaucracy and hierarchy, Gogol's dark comedy exposes one man's reality spiralling deeper into a surreal fantasy world. Performed by award-winning actor, Robert Bowman and directed by Olivier Award nominee Sinéad Rushe. '...Bowman perfectly encapsulates the madness as we watch him unravel before our eyes and head deeper into a fantasy world' (Western Mail).