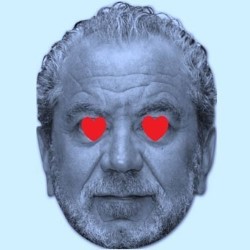 Hi! It's the Derek-meister here. You probably remember me for nearly winning The Apprentice (14th place in 2009). Come team-building with me in the Cotswolds. Let's bluesky our out-the-box thinking and see what sticks to the wall! No refunds. Raucous comedy from the producers of previous Fringe smashes: 'Critical!' **** (BritishTheatreGuide.info) A Geek Tragedy 'Hysterically good' **** (ThreeWeeks), 'Allo 'Allo 'Had the audience in fits of laughter' ***** (ThreeWeeks), The Prime of Miss Jean Brodie **** (Edinburgh Evening News), Sex, Lies and Eurovision ***** (ThreeWeeks), Trainspotting: ***** (EdinburghGuide.com), The Steamie: ***** (BritishTheatreGuide.info). www.practical-magic.org

This year's show is Desperately Seeking Sugar. The show is punchy comedy set in the cut-throat world of business. It is centred on fictitious failed Apprentice contestant Derek. After coming 14th in the 2009 competition Derek is inviting us to come team-building with him in the Cotswolds. So let us all blue-sky our out-the-box thinking and see what sticks to the wall...

The show promises to be a hugely entertaining piece. It has been written by Practical Magic's producer Alan Bayley in collaboration with Iain Campbell. Alan is the writer of several previous Fringe hits including - Critical! (A sociopath's guide to influencing Edinburgh Fringe reviewers), Barry Brennan's Bimonthly Dungeons and Dragons Sessions - A Geek Tragedy, Sex Lies & Eurovision, 21 Girlfriends and How to be Dead.

Alan says of the show: "We're continuing our tradition of bringing entertaining comedy to the Fringe. Our shows aim to provide straightforward entertainment with loads of laughs."

Co-writer Iain who is playing Derek in the production says "anybody who has ever worked in a corporate environment will recognise the characters in this show - get ready for some b*** s*** bingo!"

Past Practical Magic EdFringe shows have included 'Allo 'Allo, Trainspotting, The Prime of Miss Jean Brodie and The Steamie.