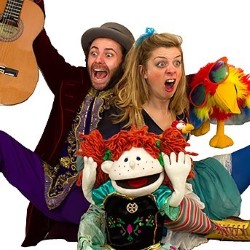 A series of ridiculous events. Love Frozen or hate it, you will laugh your stripy socks off at these two lovable clowns and their puppet rock band. Join Nicko the beardy Australian and Cat from CBBC's comedy sketch show FIT (and a brand new CBeebies show out soon) for a fun, dynamic and super-silly show. Featuring parodies of your children's favourite film moments, comedy songs, original live music and real magic, don't expect your kids to be doing nothing; they'll be saving the day! These two have entertained children for 8yrs with BBC Educational, CBBC and live performance.