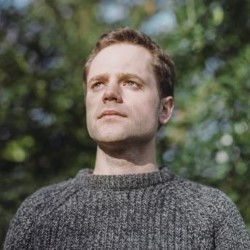 Lucky pup Elms is back with a show that seems to be about marriage and adulthood, but actually it's about compromise and then at the end you find out it's all been about love. Musical Comedy Awards winner 2014, Chortle Awards finalist 2012, Mr Goldsworth in smash-hit show Dracula, Mr Swallow. 'Beautiful, funny, clever and utterly engaging' **** (Scotsman). 'Offers something that feels entirely new' (Guardian). 'Winning combination of linguistic sharpness and charming meta-silliness' **** (List). 'Original, intelligent and madcap' **** (WhatsOnStage.com). 'Staking out his own comedy territory' (Guardian). 'Intelligently comic and joyously silly' **** (BroadwayBaby.com).

With songs that hold their own when compared to Demetri Martin and Bo Burnham and a stage presence that no less than three Edinburgh publications last year called "mild mannered" David is getting ready to take Fringe 2015 by storm...a very serene storm. Featuring such soon-to-be classics as "Oh boy, oh mama, you're a total mystery to me".

This year Elms sets out to look at marriage and adulthood, but the show is actually about compromise...and ultimately about love, or possibly identity or maybe mystery.

His on-screen credits include: BBC Comedy Presents, the BBC 3 Edinburgh Marathon Show, various sketch roles for the Sam & Steve's Silent Sketch Show pilot and Matt Lucas' latest BBC pilot Pompidou. Radio credits include Radio 4xtra. He is also the writer and star of critically acclaimed short film SWAG which has earned a plethora of awards including Best Actor at the Los Angeles Short Film Festival. He is the creator and host of Time Out Critic's Choice London stand up night - 'Dave Has Mates'.