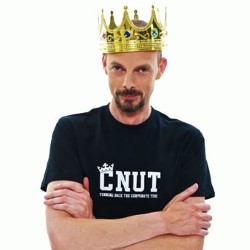 One comedian's hilarious battle with French Connection (FCUK) for the right to wear his CNUT t-shirt on stage. An incredible exposé of the hypocrisy of giant corporations by a man with an HND in tourism. Directed by John Gordillo. Following two sell-out runs, these are the final UK dates before the documentary based on the show is released in September. 'Hilarious' (ThreeWeeks). 'Love your story, huge congrats my friend' (Mark Thomas). 'Fcuking Brilliant' (Hal Cruttenden). 'One of the best shows I've seen ... you need to see it' **** (Punchline-Comedy.com). 'Remarkable' **** (BroadwayBaby.com).