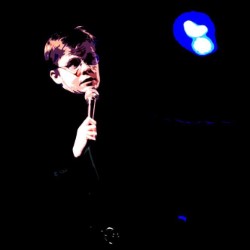 Based upon the life of the influential and acerbic comedian, Bill Hicks: Dark Poet is a fusion between traditional storytelling monodrama and modern stand-up. Framed as a typical Bill Hicks stand-up gig, the play depicts Hicks at the end of his short but action-packed life, ruminating on a variety of topics. These include his childhood, his family, his love of pornography, his alcoholism, drug use, stories of gigs gone sour, the loneliness of touring, past relationships with women and his impending death at the hands of pancreatic cancer. Based on the biography Agent of Evolution.