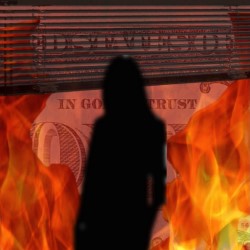 A political satire and a dark comedy revealing an uncompromised view of our political world from behind the scenes. Washington DC, USA, in a near future. The Western Empire is sinking like the Titanic. Riots are everywhere. Both sharing heavy responsibilities in the current crisis, Congressman John White and banker Blythe Sanders meet in an abandoned office and get caught in the whirlpool of their incompatible visions of power, love and society. They are now irreversibly stuck together between their love of power and the power of their love, for better, for worse and the world to come.

Dark Matter is a political satire and a dark comedy that aims at showing an uncompromised view of our political world seen from backstage. It questions Power, its reality, its visibility and its layers. As well as the capacity of a human being to survive and deal with the duel between morality and necessity.

Washington DC in a near future. Congress is burning. Riots have taken over the streets. Chaos is at the doorstep.

Fame-addicted and corrupted congressman John White and cold blooded banker Blythe Sanders; both sharing heavy responsibilities in the current crisis, are sent to meet in an abandoned office.

Meeting for the second time in 15 years, John and Blythe are caught in the whirlpool of their incompatible vision of Power, Love and Society. They are now irreversibly stuck together for better, for worse and for the world to come.