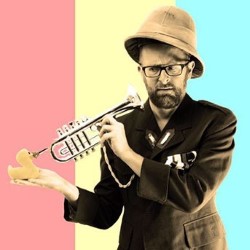 Life's weightier questions are thoroughly demolished in Dan Lees' Brainchild, an award-winning physical comedy that veers from the profound to the ridiculous. A host of bizarre characters explore the futility of our existence, from a cheese-loving Pope to a lonely cowboy with only a goldfish for a friend. Directed by Mick Barnfather (Complicite, Told By An Idiot). 'An evening of discovery and laughter' **** (Adelaide Advertiser). 'Downright hilarious ... comedy that deserves to be commended for challenging the boundaries and creating an unforgettable experience' **** (BroadwayBaby.com). Judges Award for Theatre winner, Mimetic Festival 2014.

After critically acclaimed runs at Adelaide, Brighton and Prague Fringes, Dan Lees brings his award-winning show to Edinburgh. Life's weightier questions are thoroughly demolished in this physical comedy, veering from the profound to ridiculous, combining clowning, eccentric dance, music and audience interaction, whilst introducing inspirational characters, from an alcoholic cheese loving pope to the world's first stand up goldfish, Alfie.

Brainchild won a Judges Award for Theatre at the Mimetic Festival in London in 2014 and was directed by Mick Barnfather (Complicite, Told By An Idiot)

Dan trained in physical theatre and clowning at the prestigious EcolePhilippe Gaulier in Paris and started performing comedy in 2008 and was a Hackney Empire New Act finalist (2008) and Amused Mouse New Act finalist (2009) with the anarchic comic duo Moonfish Rhumba. Over the years he has performed in a number of shows at the Edinburgh Festival including with Phil Burgers (Dr Brown) in his experimental show, BeWhatTheFuck in 2014. He is also a member of clown troupe, The Honky Bonk Comrades. Dan recently featured in Living With Monkey, a pilot for a new TV series by Nina Conti.