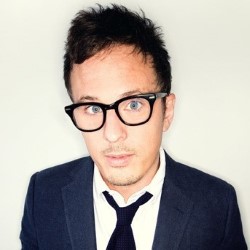 Star of BBC3's cult hit sitcom How Not To Live Your Life, Dan Clark, presents The Wow Wow Show! A very British take on the American late night talk show such as Letterman and Fallon, Dan plays host to an evening of stand-up and sketches from the new wave of UK comic talent: set pieces, house band and very special guests. 'The bizarre and the brilliant. Uninterrupted comic ecstasy!' (Metro) 'One of the coolest nights in London... home to a lot of the new wave of young, offbeat, erudite comedians.' (Time Out).

Following a sell-out residency at the Soho Theatre, star of BBC3's cult hit sitcom How Not To Live Your Life, Dan Clark, will be presenting an exciting and eclectic new show The Wow Wow Show! at the Edinburgh Festival for three nights only.

The Wow Wow Show is a very British take on the American late night talk shows such as David Letterman and Jimmy Fallon, with Dan interviewing a different line-up of guests each show, only the guests aren't quite what is to be expected and are in fact fabricated in a hilarious fashion by a consistently fantastic bill of new wave comic talent from the UK, including Sara Pascoe and Liam Williams, in character. As well as interviews, Dan will host the entire show with an opening monologue; games and music from his house band Wow Wow Band.