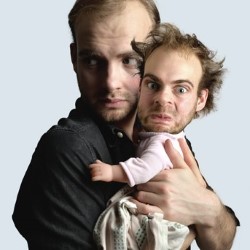 With one million YouTube hits and counting, Damien Slash brings his character comedy creations to Edinburgh in glorious 4D. Meet his 'wonderful, distinct, impressive' (Chortle.co.uk) creations including Mineral Water Critics, Mythical Shamans, Hardcore Gamers, Garage MCs, Gambling Addicts and more. As seen in the hugely popular web-series Ideas Men, featured during YouTube Comedy Week. One of London is Funny's 10 Comics to Look Out For, from Channel 4's Mashed and BBC's Richard Hammond's Secret Service. 'A hugely talented writer and performer whose observations and creativity are as brilliant as they're funny' (ComedyBlogedy.com). 'Soon to be massive' (NME).

With 1 million hits and counting, 11 thousand followers, creator of the finest character comedy online and the most sought after young voice artist in the UK, Damien Slash makes his Edinburgh Festival debut at the Pleasance Courtyard for the whole month of August with his show Damien Slash: Ubermen.

Meet his character creations that include Mineral Water Critics, Mythical Shamans, Hardcore Gamers, Garage MCs, Think Tankers, Gambling Addicts and more. As seen in the hugely popular web-series Ideas Men, featured during YouTube Comedy Week and Comic Relief's School Of YouTube. Find out why these characters have gone viral online in this effervescent, fresh off the press, character comedy cataclysm.

Who is Damien Slash? Damien Slash is the pseudonym for 28 year old, comedian, voice-artist and musician Daniel Barker. Damien Slash has featured as part of YouTube Comedy Week, Channel 4's Mashed and Richard Hammond's Secret Service. Barker was previously signed to EMI for several years, producing music as The Aspirins For My Children for major artists including; Grace Jones, Scissor Sisters and Lana Del Rey. He is also a playwright, who started out at The Royal Court Young Writers festival and a talented voice artist/ actor, who you might recognize as the persuasive tone in movies including; Get Santa (2014), Kill Your Friends (2015) and Minions (2015). He is currently starring as every character in the new game 'Not A Hero' by BAFTA winning developers Roll 7 and working on projects for the BBC and Rough Cut Productions.