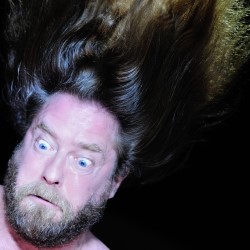 We've all got 'em: struggles, self-orchestrated pitfalls, flat tyres, ball cancer... Un/fortunately we can't all make a living droning on about them to room full (dreamer) of people very likely nursing bigger problems themselves. But for some reason a healthy handful of tolerant souls, against all logic, love watching our melodramatic, melodic, musing Mooseman do just that! Now he's got aggressive arthritis destroying his joints, an Everest basecamp show on the horizon, and scuppered grand plans to keep active. However, disease hasn't affected his singing voice... it's still bad... But why not watch him cry... sorry, try!