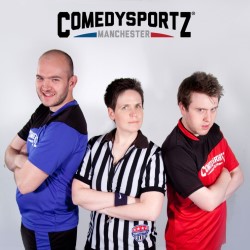 ComedySportz is an all ages, all improvised show. Two teams battle it out for the biggest laughs as players create quick-witted sketches, scenes and songs from whatever suggestions are thrown at them by the audience. It's a show that's fast, feel-good and always unpredictably funny. The show can't start without you! '...a non-stop stream of gags, sketches and general hilarity' (Lancashire Evening Post). '...skilled and funny with a remarkable ability to think on their feet' **** (ThreeWeeks). 'Kids enjoyed the interactive nature of the show and were in fits of giggles all the way through' (NetMums.com).

ComedySportz returns to The Edinburgh Fringe for another week of laugh filled matches. The show has two teams battling it out for laughs as players create quick-witted sketches, scenes and songs from whatever suggestions are thrown at them by the audience. It's an all ages, all improvised show that's fast, feel good and always unpredictably funny. There's a referee on hand to steer the entertainment, call any fouls and help the audience decide the winner.

ComedySportz Manchester is part of the worldwide ComedySportz brand and represents each year at the Edinburgh Festival, often with special appearances from players from across the globe.

"ComedySportz is a 30 year old organisation and we're proud to be it's representatives in the world's biggest arts festival," says ComedySportz player Sean Mason. "The show is all about families, our global family and our audience."

"The show is completely improvised so we never know what is going to happen, but whichever team wins it's always the audience that are the real winners" says ComedySportz Manchester head honcho Brainne Edge. "We offer something that many shows don't and that's something that the whole family can enjoy from kids to adult kids."

"Absolutely," agrees Sean. "Being part of the Laughing Horse Free Festival is part of our mission statement too. We want to provide entertainment that anyone can enjoy without breaking the budget so that people can afford to see as many shows as possible."

"We always get quite a loyal following in Edinburgh with people returning throughout the week as every show will be different," adds Brainne. Appearing for one week only this is a show you can't afford to miss. "So come on down, the show can't start without you!"