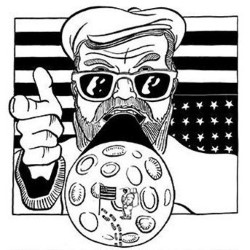 1969. The moon. A challenge to American ideas of exceptionalism, industry, ambition and the power of dreams. Soon there will be an American flag on her surface. Not 240,000 miles away, but on a secret sound stage on the west coast of the United States. Giant Leap is a fast talking, foul-mouthed comedy-drama in which a group of writers are tasked with creating the crowning line of their careers: Neil Armstrong's words as America fakes the 1969 moon landing. Writers: Mickey Down and Konrad Kay. Director: Alexander Lass. Starring comedians Tom Stade and Phil Nichol.

A Hollywood producer helps a group of writers create the crowning line of their careers: Neil Armstrong's first words as the USA fakes the 1969 moon 'landing'. A punchy, fast-talking, foul mouthed comedy-drama: Glengarry Glen Ross meets The Thick of It dressed in Mad Men clothing.