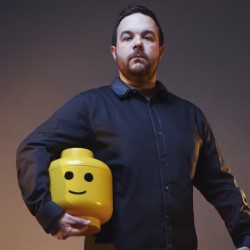 Last year comedian Colin became an amputee, making use of his surname Leggo. He now presents his gloriously silly, life affirming show exploring how losing a leg needn't stop you standing up. Colin is also well known for his unique take on Cornish culture through his popular Youtube channel which has received over 700,000 hits. Several of his comic videos have gone viral, including Grand Theft Cornwall, a parody of the well-known game and Cornish Is which featured on the Scott Mills Show, BBC Radio 1. 'Hilarious' (Mirror). Nominee Best Debut Show at the Dave Leicester Comedy Festival.

In May last year comedian Colin Leggo became a below-the-knee amputee. For a stand up this could be an occupational disaster, but instead Colin has embraced this situation and created his debut one man show Leggoland.

Both life affirming and ultimately very silly, the show has been helped by Colin's unusual - and quite prescient - name and by his unstoppably cheery disposition. "Losing a leg needn't stop you standing up" says Colin, and there's more golden wisdom where that came from.

After a decade of problems with his leg, Colin feels well qualified to bring you the highs and lows of hospital visits, including brushes with visiting fame, midnight liaisons with old men, and talking to national press in your pants.

Colin Leggo is a stand-up comedian, Youtube botherer and Cornish fool who dabbles in the fine arts of puns, wordplay and having a foot made of plastic. A stand up comic since 2001, Colin is also one half of double act Colin & Rob who have been finalists in both the Laughing House New Act of the Year and the Daily Telegraph Open Mic Awards.

A proud Cornishman, Colin's YouTube channel has a strong following both internationally and from his homeland, with over 750,000 views and 2,000 subscribers, the channel core of Cornish based videos which have built up his dedicated fan base.