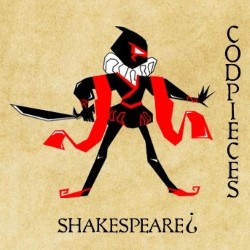 Codpieces are Shakespearean parodies by Perry Pontac told in the form of prefaces and continuations... Meet the wife before Lear decides to share out his kingdom or what happens after the end of Hamlet, who will be king? 'Pontac stands to the side of these familiar masterpieces, treating them with irony rather than disrespect and in language so close to Shakespeare's that it's a while before the penny drops and one realises this is parody of the highest order' (from the Foreword by Alan Bennett). See also Codpieces: Fatal Loins.