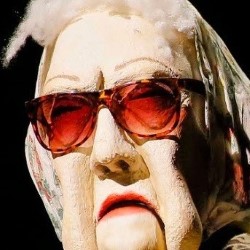 Once upon a time in a far off imaginary place... a giant fell out of the sky. 'There were roofs down, windows blown in', says Puppet Granny Tina Henderson, puffing on a Malboro Light. 'It wasnae funny.' The makers of Fringe First Award-winning show The Table, return to Edinburgh with a puppet-docudrama which tells the true story of Jack and the Beanstalk. They look behind the scenes and uncover a dark tale of gambling, greed, theft and murder. 'Dazzling' (Scotsman). 'A weird feel good delight' (Telegraph). 'Blind Summit are the UK's puppet masters' (Guardian).