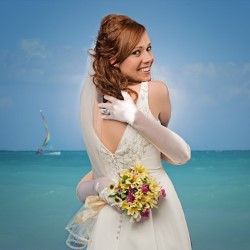 Canadian Caroline Bierman coined the phrase 'ONEymoon' and reinvented a long standing social convention. This celebration was nominated for a Canadian Comedy Award, Best Solo Show. Audiences join Caroline as her family and friends toast her unusual day and get a sneak peak at her vacation and rise to fame. Rapping. Dancing. Speeches. Your presence is gift enough. Christel Bartelse is a Canadian Fringe Veteran. 'Julie Andrews gone wild' (Montreal Gazette). ***** (Times Colonist). 'Tina Fey, Jane Lynch, and Amy Sedaris ... Bartelse would not look out of place next to these' (LostInThePond.com). ***** (CBC).

Four-time Canadian Comedy Award nominee Christel Bartelse is bringing her signature high-energy wit to the 2015 Edinburgh Festival Fringe - for the very first time! Her latest production: the Canadian Comedy Award-nominated ONEymoon - a tour-de-force comedy with a sprinkle of dance, improv, and audience participation, not to mention a sneaky tug at the heart.

Written and performed by Bartelse (the creator of Fringe hits Chaotica & Significant Me), ONEymoon tells the tale of Caroline Bierman, an uncompromising perfectionist who re-invents society's longstanding convention by doing the unthinkable: she marries herself. Alas, Caroline soon struggles to accept the realities of her new life once the honeymoon phase is over.

Join Caroline at her wedding, her ONEymoon, and then back home six months later as she prepares her anniversary dinner and shares her frantic pursuit of domestic bliss - all while oblivious to the obvious: every relationship, even one with yourself, takes a whole lot of work.

"I feel there's a universal element to this show," says Bartelse, "because we all at one point have had fears surrounding relationships, marriage, or remaining single - not to mention confusion about what we really want."

Although Bartelse has toured the Canadian Fringe circuit for years, this is her first trip to Edinburgh. Coming off her real-life wedding a few months back (to a British fellow, no less!), the timing seemed ideal to fulfill her dream of performing at the iconic festival. Bartelse is excited about her stay in Scotland, experiencing the Fringe, and looking ahead to an extended stay in the near future.