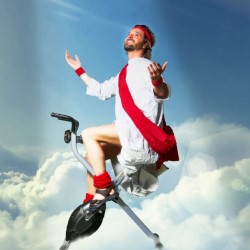 JC's in trouble. With only 12 Twitter followers, he is taking time away from the call centre in the sky to tout for recruits the only way he knows how: love and wind machines. In biblical fashion and sweat repellent robe, he sets the record straight about the lost years of his life and death. Join him in an exploration of the angsty songwriting teenager, the spin class instructing graduate and, cruci(fixion)ally, the immortal disco-dancing lifestyle Guru who saved mankind. Prepare for revelations and Febreeze in this interactive satirical comedy. The greatest story never told.